Lucion Services brings together a group of multi-award-winning multidisciplinary risk management companies delivering trusted services across multiple sectors.
Across the group, we help our clients to achieve full compliance with UK (and international) occupational safety and environmental regulations.

Consultant to Lucion Marine, John Chillingworth shares his guidance on what Ship Owners should do upon finding asbestos during an IHM survey.

John highlights that IHM detects asbestos in only a representative sample, and provides details of what needs to be done in order to ensure the determination of the full extent of the asbestos within the ship that might have been introduced at the build or during routine maintenance.

An IHM consists of taking samples for asbestos, but it is only a representative asbestos survey. A normal ship asbestos survey would involve a lot more visual checks and taking between 100 and 400 samples depending on the type and size of the ship. On an IHM it could be between 40 and 100 asbestos test samples. 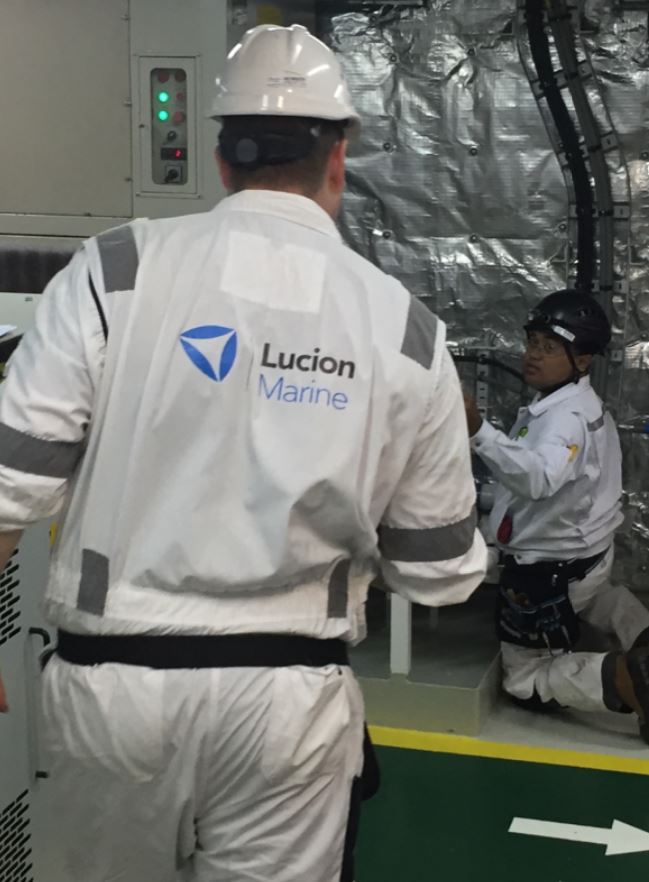 If asbestos is found on an IHM survey it might have been introduced at the new build or during routine maintenance, either way, a detailed asbestos survey should be carried out to determine the full extent of the asbestos within the ship.

The surveyors will check similar systems where the asbestos was found and also look for similar material gaskets or insulation.

After a detailed asbestos survey, a decision can be made with class and flag state of the best course of action, which could be to manage or remove the asbestos. It should be noted that SOLAS states all post-2002 ships should be asbestos free apart from 3 specific components and after 2011 should be totally asbestos free.

Background to why asbestos is still found in ships

Asbestos has been banned from ships since July 2002, however it is still found in over 60% of ships and more concerning is that up until recently asbestos was still found in over 60% of new ships, even though the builders had declared the ships to be “asbestos free”. This situation has improved over the last couple of years as more ship owners have done independent asbestos testing during the build phase and not relying on material declarations. Which was driven by promoting awareness by regulatory bodies and specialist survey companies highlighting the situation. 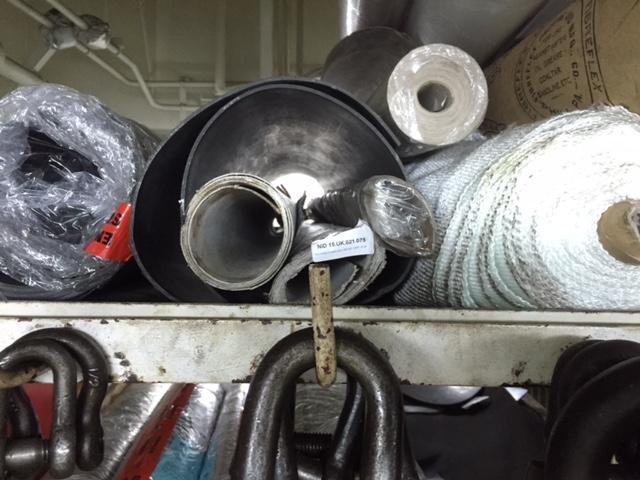 How does asbestos get into ships?

When a shipyard or ship owner orders materials and specifies they are to be asbestos free, what exactly are they going to get.

The term Asbestos free can be misleading as there are different International standards that constitute what is "asbestos free". In the USA it is up to a 1.0% content, in the EU it is 0.1%, Australia is 0% and China has no official standard, We have found as much as 15% asbestos, in materials that are declared asbestos free in China. The problem is compounded by the fact that there is no testing and certification of materials by manufacturers.

The World supply chain is such that a lot of materials and equipment originate from China where it is still legal to use asbestos. Chinese manufacturers may set up a production line to supply "asbestos free" materials, again they are reliant on their suppliers material content declarations being accurate. In addition they may also have cross contamination in their factory from other production lines that are using asbestos in their products.

Ship owners can contaminate ships as asbestos is often unknowingly introduced into a  new or existing ship  in equipment and materials supplied to the ship by the owners. Even if the owners  have specified the supplies have to be "asbestos free".

How are the IMO and SOLAS regulations enforced?

Several Government Flag State Authorities such as Australia and the Netherlands are aware that the Shipyard declarations are often inaccurate. To ensure their ships are "asbestos free" they insist that on a ship registered under their flag must have a verification asbestos survey performed by a marine specialist ISO17020 accredited company and any asbestos found has to be removed before the ships can be registered.

Australia and the Netherlands have been very proactive in highlighting the situation by carrying out unannounced Port inspections on ships visiting their Ports and have well documented the frequency of finding asbestos in ships with an "asbestos free" declaration.

With ships built before July 2002, IMO states the ship owner should have a specialist asbestos survey carried out and if asbestos is found they have to produce an asbestos register and implement an asbestos management plan. In addition, Lucion Marine also recommend the crew should undertake an asbestos awareness course, which should include a documented test. This way the ship owner can protect himself from any potential crew claims for exposure to asbestos, as it can be stated that the crewman had adequate training to know not to expose themselves to the recorded asbestos. 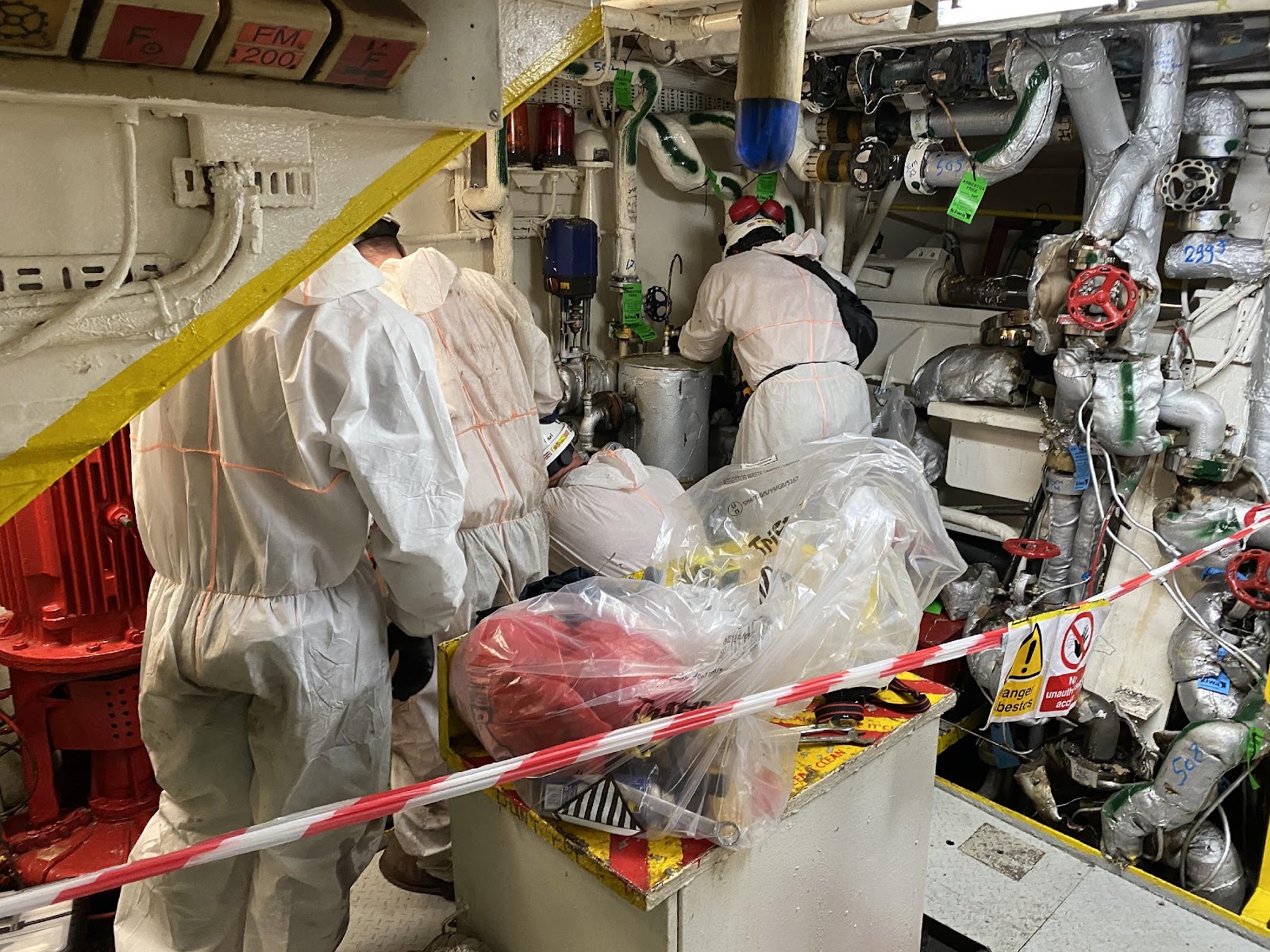 Examples of where asbestos is found

Lucion Marine has 15 years of experience in surveying all kinds of ships, all their surveyors are trained to survey all types of ships and some are certified for helicopter transfer to oil rigs. They have an extensive database of where asbestos is usually found on certain ships.

Why do some Shipowners that do not have to comply with the EU regulations are reluctant to have asbestos surveys carried on existing ships?

There are still over 40,000 ships worldwide that should have an Inventory of Hazardous Materials when the Hong Kong Convention is ratified, however some ship owners are reluctant to have an IHM done because of the asbestos survey component. They are currently compliant and in their opinion, they have an asbestos free declaration which is accepted by the classification societies as a “statement of fact” and in turn this is accepted by most flag states that register the ships. That's why they don't want to generate a potential headache by finding asbestos on the ship and then having to apply for an asbestos fee exemption certificate from the flag state authority and then have to remove the asbestos within 3 years.

That said the ship owners have a duty of care for their crews and anyone that works on the ship, and considering it is well documented of the extent of asbestos in ships, they should have a specialist survey carried out. We find it appalling that many flag states ignore the situation and allow shipyard asbestos free declarations to be considered acceptable.

Lucion Marine has found that ships built anywhere in the world can be affected, for example, a 2008 European built ship was found to have asbestos in a European built incinerator.

That said China supplies material and equipment globally, it can even be included in equipment that is made all over the world and consequently, as no actual testing of materials is carried out, everything is based on a declaration and this is a ridiculous situation. 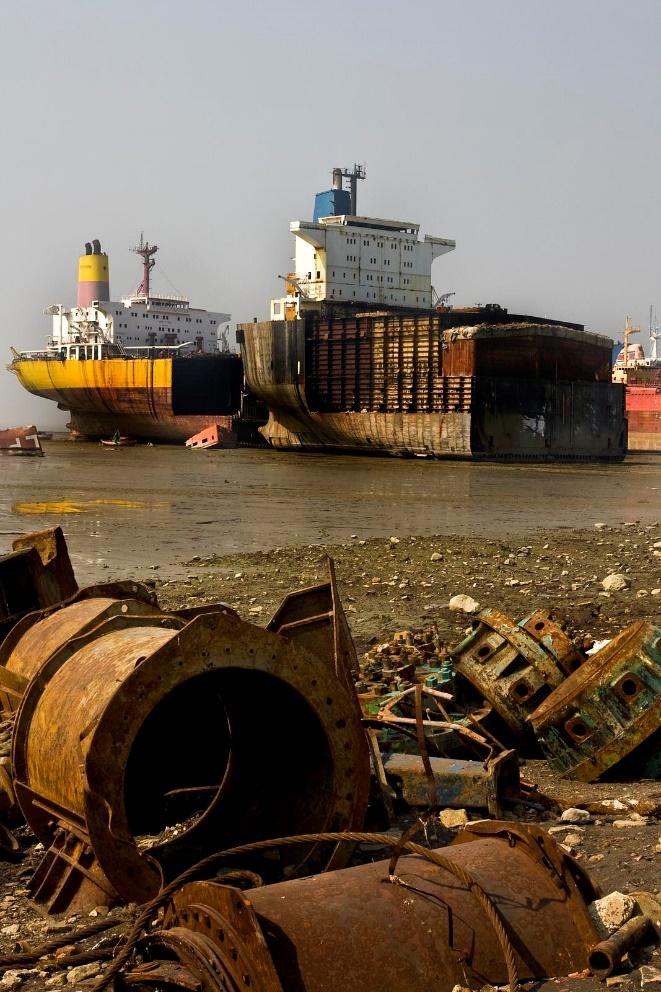 In 2013 the EU established progressive timelines to implement an EU directive, that all EU ships should have an Inventory of Hazardous Materials (IHM). New builds had to have an IHM from 2018 however again is only based on the suppliers declarations and no physical survey, so there is a good chance those ships will have asbestos on board.

The IHM can be used in assisting scrappers to develop a ship recycling plan to remove and correctly dispose of hazardous materials to International environmental standards. Internationally the Hong Kong Convention of 2009 stipulates that all ships have to have an IHM, however the process is still waiting for sufficient countries to ratify the regulation. The EU directive for all European ships came into force December 2020. 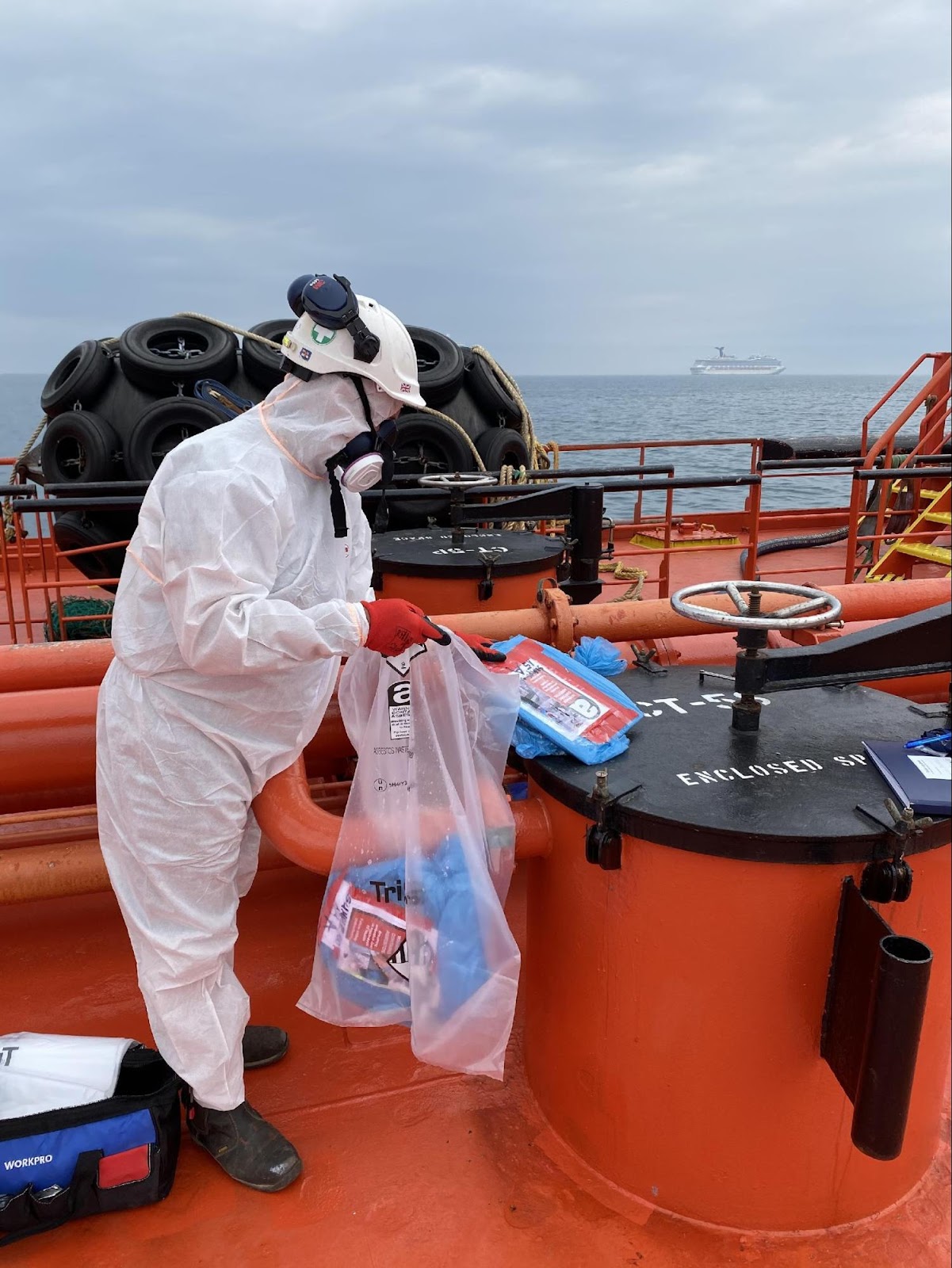 How do you ensure a ship is asbestos free and what are the incentives for the ship owner?

Some of the incentives for ship owners:

John Chillingworth, Consultant to Lucion Marine, has extensive experience in Technical and Marine operations and has held high-level positions carrying out and developing ship repair and conversion projects worldwide.

John is a former Chief Engineer of Queen Elizabeth 2 and was a Technical Manager with Cunard Line. He was also a Vice President of Marine operations at a Miami based cruise line where he oversaw the purchase and conversion of several cruise ships.

Several of those projects involved asbestos and it became apparent that there were no marine specialists performing such work, so he established Fibrecheck Marine, a UK based asbestos abatement company which then performed multi-million dollar asbestos ship projects worldwide.

In 2013 he joined CTI to develop the global marine sector in relation to ship surveys. and the business development of the divisions in China, Singapore, USA  and Europe.

In 2017 he joined Lucion Marine to support the marine team in the ongoing development.

The Inventory of Hazardous Materials (IHM) is a structured system to control hazardous materials onboard ships and achieve compliance with the EU Ship Recycling Regulation (EU SRR) and Hong Kong Convention (HKC) for the Safe and Environmentally Sound Recycling of Ships. Read Lucion Marine clients' most frequently asked questions and answers.

What Should You Do If You Discover Asbestos?

Does your team know what to do in the event that they find asbestos? Use our simple asbestos discovery flowchart to inform your teams about what to do when suspected asbestos is discovered.